Which One is more Powerful Idea or Execution ! 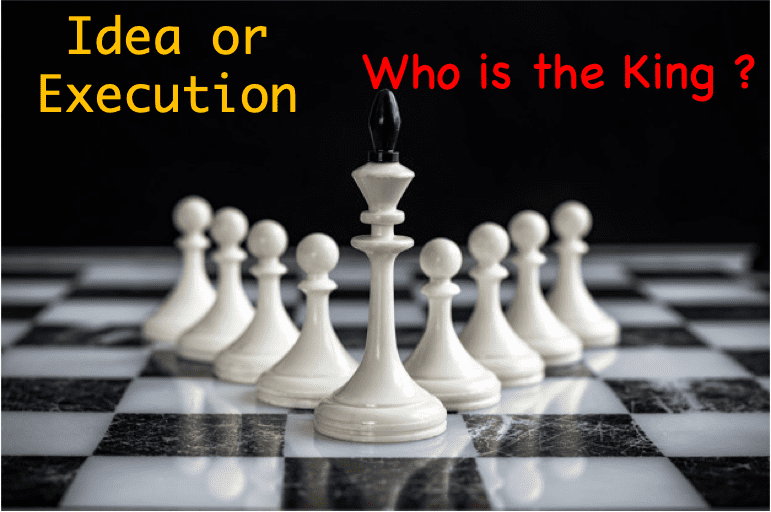 One powerful idea gives a Eureka moment to us. We think like, this idea is outstanding one and can provide fortune! Then again after several weeks or months one more idea come in your mind and again you are have similar feeling. But during this period nothing has changed in your life, you are still doing all those things, which you were doing earlier. So, what happen to your outstanding or powerful ideas. This is very common phenomenon among peoples, that most of them can have those ideas but their execution power is NIL.

Any idea weak or strong, will result in to Zero Value unless it got executed. Execution is the only king, not idea. Many a time we lost much of our life period in the reach of good idea to start business. What happen, we lose years not months, to get idea and then also without execution we remain at same spot financially. If you read newspaper or magazine, you will find few stories of new entrepreneurs by implementing unique ideas. More than 90 % business fails in first five year from inception. One of the main reason is poor execution of that idea.

Other aspect is also vert insightful, if we want to improve existing product, service. With this logic also we can create fortune. Good part here is we can gather most of the required information for smooth execution.

An idea trapped in your brain is like a supercar trapped in the garage with a dead battery. It accomplishes nothing and its purpose is untapped. Execution is making an idea real and giving the battery a charge. Execution is taking that speedster out of the garage and slamming the accelerator to the floor, with the wind giving you a temporary face-lift. Execution is getting that idea out of your mind on onto the roads of possibility. Many entrepreneurs struggle to differentiate between idea and execution. They think ideas are worth millions, when success is never about the idea but about the execution.

Ideas are nothing but a chemical reaction in your brain. It’s an event that requires little effort. An idea is the event, the execution is the process. We all events in our life but we do not want to go through the process. Successful entrepreneurs don’t start in flashes of brilliance; no, they take that flash of an idea (the event) and transform it into massive execution (the process). Execution is the main differentiator separating winners and losers from their ideas. If you want to retire 30 years early, you need a dominant, relentless king i.e. execution.

Each Business is Unique!

There might be several reason for that, may be first shop owner doesn’t have debt on his business, so need not to pay the EMIs and other one have debt thus EMIs. Or first one is having his own shop in that posh region, but other one has doing business on rental property. DNA of each business is unique with respect to financial aspects, the  team who is managing that business & it’s psychology.

I shall share you one more example, assume there are two showrooms for shoes, close to each other. Whenever you pass from that area, you see that one is always having customers and other one is hardly having customer. Here reason can be like the owner of first is highly focused on customer and taking good care of customer and then in return customers are also taking good care of him. On other side, owner is least bothered about customer, because he is not at all interested in this business but his father asked him to do so.

You can see some real examples all around, if there is one outlet running successfully, other people try to open similar outlet in nearby area. Who is the winner between them? It’s decided by their execution strategy not from idea as both are having similar product.

Great advice from MJ DeMarco to get the Funding!

When it comes to your ideas, your plans, and your business, you NEVER know what works until you put it out to the world. A common question asked by people is “How can I find investors for my idea?” It doesn’t matter if the idea is an invention or a great new website or great service, answer is never what these people want to hear.

If you want investors, get out and execute. Create a prototype. Create a brand. Create a track record that others can see or touch. Dive into process. When you have a physical manifestation of an idea, investors will open their wallets. Heck, be good enough and they will be fighting to give you money.

You see, when you have nothing except 120 pages of text, charts, and graphs, that shows organizational skills, not execution. Angels to private equity never invest in business plans—they invest in people with track records of execution. That is your best business plan! So if you really want to get funding for your business, get out and make your idea tangible. Give investors something they can see, touch, and feel. Give investors a glimpse of your execution, because that is what creates an outstanding impact in the journey to achieve your goals.

“Having the world’s best idea will do you no good unless you act on it. People who want milk shouldn’t sit on a stool in the middle of the field in hopes that a cow will back up to them.” ~ Curtis Grant

Money is negative or positive ? What is opinion? If your think that money is positive, I can bet, you Read more

What is Your Mindset ?

American psychologist, Carol Dweck shared in her book Mindset ‘For thirty years, my research has shown that the view you Read more

I shall share my life experiences with subconscious power. These experiences have really transformed my life from village boy to Read more

Nagavara Ramarao Narayana Murthy is the co-founder of Infosys. He has been described as the "father of the Indian IT sector" Read more