Whatever You Focus on, Grows! (Real Life Experiments)

Whatever You Focus on, Grows! (Real Life Experiments)

Whatever you focus on, Grows! Have you experienced this phenomenon in your life? Be it your study, work, business, family relations, money, etc. If you want to improve your financial life, then you need to focus on several aspects related to money. It may seem complex at the beginning but you will love this phenomenon later on. It’s true for all the aspects of life, which you can think of.

Life is the study of attention. Where your focus goes, your heart goes also. Your ability to divert your focus from activities of lower value to activities of higher value is central to everything you accomplish in life.

In 1928, at the Hawthorne Electric Plant of General Electric, a group of time and motion experts conducted a series of experiments aimed at increasing the productivity of workers based on varying the working conditions and the environment in the plant.

The researchers selected a group of women who worked on a production line assembling motors. They explained to the women that they were going to be experimenting to find the best combination of working conditions to achieve the highest level of productivity with the smallest number of mistakes. These women had been chosen to be the subjects of the experiment.

They then began their experiments by raising the light levels in the production area. Within a couple of days, production went up and defects went down. The researchers were delighted with these results.

They then lowered the lighting levels to test the differences. But to their surprise, production levels went up again. They experimented with other working conditions like raising and lowering the noise levels. They raised and lowered the room temperature. Also, they altered the seating arrangements and the work order of the employees. But in every case, productivity levels went up. The researchers were baffled by these results.

Finally, they sat down with a focus group of the workers and explained to them what they had found. They asked them, “Why do you think it is that production levels have gone up, no matter what variables we changed in the working conditions?”

The answer they got back was surprising. The participants told the researchers that they had never before been singled out and treated as anything other than simple factory workers. When they were chosen to be subjects of this experiment, their levels of self-esteem and self-respect had gone up. They felt better about themselves. They felt more important. As a result, they did their work better than they had ever done it before. Each change in the working conditions reminded them that they had been specially selected for this study. They worked harder and better. And their productivity increased.

This breakthrough at the Hawthorne Electric Plant triggered the management revolution that has changed the world of work as we know it today. It was the discovery of the psychological factors of production that led to the breakthrough work of management researchers such as Maslow, McGregor, Herzberg, Drucker, and many others. Today, thousands of the best minds in the world are committed to improving the psychological factors that contribute to higher levels of productivity and output in every work situation.

“Lack of direction, not lack of time, is the problem. We all have twenty-four hour days.” – Zig Ziglar

What psychologists and others have discovered is that the very act of observing a behavior tends to change that behavior for the better. This is one of the greatest breakthroughs in the understanding of personal performance. This critical discovery contains the key to dramatically improving the quality of any area of your life.

Sometimes Brian Tracy asks seminar audiences this question: “Imagine that there are several researchers from the local university in this room. Imagine also that these researchers will be observing you and writing a report later on how well you personally took notes during this seminar. Would that have any effect on your note-taking ability?”

Everyone smiles and agrees that if they knew that they were being carefully observed and evaluated on their note-taking ability, they would pay much more attention to the way they took notes. They would be much more aware, and they would do it far better than if no one was watching.

This point is simple yet profound and important. When you observe yourself engaging in any activity, you become more conscious and aware of that activity, and you do it better. When you pay attention to any element of your behavior, you tend to perform far better in that area than you would if you were not paying attention or if you had not thought about it at all.

Concept of The Efficiency Curve

Your continuous focus on any activity reduces the effort for the same amount of work in the long run. This can be explained by ‘The efficiency curve’. This curve explains why some people earn several times as much as other people in the same field. It also explains why some companies produce far more of a product or service at a consistently high level of quality and at a lower price than others.

They can then pass their lower production costs onto their customers, sell for less, and undercut their competitors, thereby increasing their market share and their profits. This efficiency curve is the key to your success as well (see Figure 1-1). 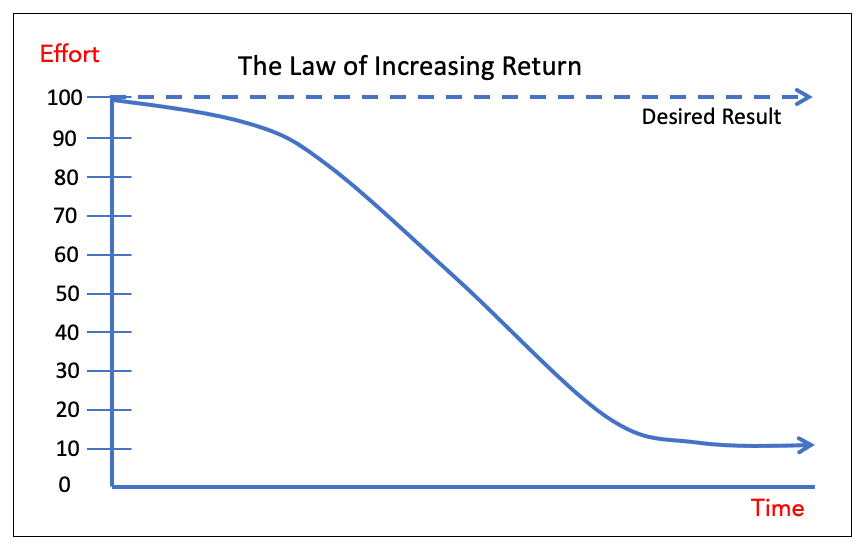 This curve looks like a ski slope moving down from left to right. When you begin work on a new job or activity, usually you have to invest a good deal of time and effort to accomplish any results at all. This is the learning phase. But if you persist, eventually you will get better and better at that particular task. As you get better, you begin moving forward and downward along this curve, taking less and less time to get the same quality and quantity of results.

Eventually, you reach the point where you can produce in one hour what a new person might take several hours to produce. Meanwhile, the quality of your work is equal to or greater than that of the less experienced person, who is spending many more hours doing the same job.

This is true for most professions. When any individual starts doing new work, he or she takes a good amount of time while learning the process. But after some time, when that person understands the system, the time automatically reduces for the same amount of work. (Excerpt is from ‘Focal Point’ by Brian Tracy)

[…] speaker, and author) states with authority that the biggest advantage to the rich is their focus, dedication, and hard […]