by Vinod Singh
in Mindfulness
Reading Time:5min read
A A

A flow state in positive psychology is the mental state in which a person performing some activity is fully immersed. It is a state of energized focus, full involvement, and enjoyment in the process of that activity. In essence, flow is characterized by the complete absorption in what one does. In this state, the person has the feel of time-lapse if enjoying that task.

We’ve all felt our sense of time vanish when we lose ourselves in an activity we enjoy. If you enjoying cooking, you feel a relatively short time but in actuality, several hours have been passed. While reading an interesting book, we forget about time as it flies quickly and even sometimes we forget our lunch. We go surfing and don’t realize how many hours we have spent in the water until the next day when our muscles ache.

The opposite is also true, when we have to complete a task we don’t want to do, every minute feels like a lifetime and we can’t stop looking at our watch. As the quip attributed to Einstein goes, “Put your hand on a hot stove for a minute and it seems like an hour. Sit with a pretty girl for an hour, and it seems like a minute. That is relativity.”

As Csikszentmihalyi asserts in his book Flow: The Psychology of Optimal Experience, flow is “the state in which people are so involved in an activity that nothing else seems to matter; the experience itself is so enjoyable that people will do it even at great cost, for the sheer sake of doing it.”

It is not only creative professionals who require the high doses of concentration that promote flow. Most athletes, chess players, and engineers also spend much of their time on activities that bring them to this state. According to Csikszentmihalyi’s research, a chess player feels the same way upon entering a state of flow as a mathematician working on a formula or a surgeon performing an operation.

He analyzed data from people around the world and discovered that flow is the same among individuals of all ages and cultures. In a flow state, we focus on a concrete task without any distractions.

How to Achieve the Flow State 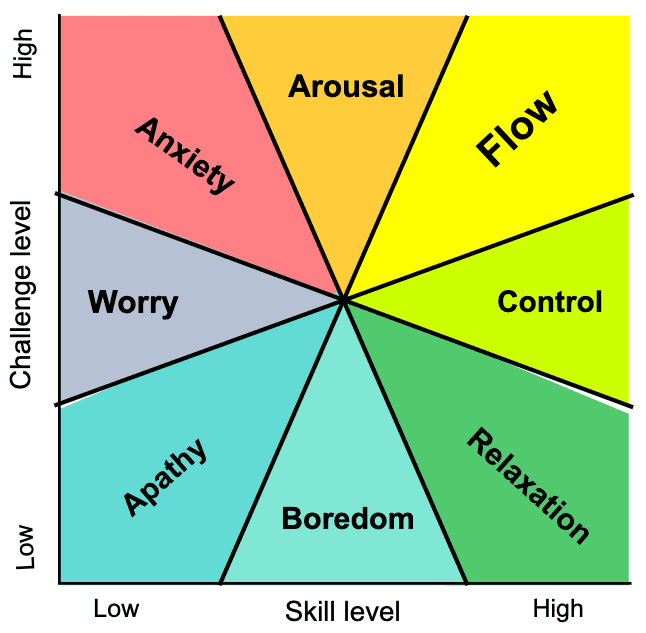 If you often find yourself losing focus while working on something you consider important, there are several strategies you can employ to increase your chances of achieving flow. (Image credit to Wikipedia)

Every task, sport, or job has a set of rules, and we need a set of skills to follow them. We get bore if the rules for completing a task or achieving a purpose are too basic relative to our skillset. Activities that are too easily lead to apathy.

If, on the other hand, we assign ourselves a task that is too difficult, we won’t have the skills to complete it and will almost certainly give up—and feel frustrated, to boot.

The ideal is to find a middle path, something aligned with our abilities but just a bit of a stretch, so we feel challenged. We want to see challenges through to the end because we enjoy the feeling of pushing ourselves. Bertrand Russell expressed an idea when he said, “To be able to concentrate for a considerable amount of time is essential to difficult achievement.”

If you’re a graphic designer, learn a new software program for your next project. If you’re a programmer, use a new programming language. And if you’re a dancer, try to incorporate into your next routine a movement that has seemed impossible for years. Add a little something extra, something that takes you out of your comfort zone.

#2 Strategy: Have a Concrete & Precise objective

Video games, board games, and sports are great ways to achieve flow because the objective tends to be very clear: Beat your rival or your own record while following a set of explicitly defined rules.

But the objective isn’t quite as clear in most situations. According to a study by Boston Consulting Group, when asked about their bosses, the number one complaint of employees at multinational corporations is that they don’t “communicate the team’s mission clearly,” and that, as a result, the employees don’t know what their objectives are.

It is much more important to have a compass pointing to a concrete objective than to have a map. Joi Ito, director of the MIT Media Lab, encourages us to use the principle of “compass over maps” as a tool to navigate our world of uncertainty. In the book Whiplash: How to Survive Our Faster Future, he and Jeff Howe write, “In an increasingly unpredictable world moving ever more quickly, a detailed map may lead you deep into the woods at an unnecessarily high cost. A good compass, though, will always take you where you need to go. It doesn’t mean that you should start your journey without any idea where you’re going. What it does mean is understanding that while the path to your goal may not be straight, you’ll finish faster and more efficiently than you would have if you had trudged along a preplanned route.

#3 Strategy: Focus on a single task at a time

This is probably one of the greatest obstacles each one of us faces today, with so much technology and so many distractions. We’re listening to a video on YouTube while writing an e-mail when suddenly a chat prompt pops up and we answer it. Then our smartphone vibrates in our pocket for message alert; just as soon as we respond to that message, we’re back at our computer, logging on to Facebook. After thirty minutes, we are realizing that we forget what e-mail we were writing.

This also happens sometimes when we put on a movie with dinner and don’t realize how delicious the dinner was until we’re taking the last bite. We often think that combining tasks will save us time, but scientific evidence shows that it has the opposite effect. Even those who claim to be good at multitasking are not very productive. In fact, they are some of the least productive people.

Our brains can take in millions of bits of information but can only actually process a few dozen per second. When we say we’re multitasking, what we’re really doing is switching back and forth between tasks very quickly. We end up spending all our energy alternating between tasks, instead of focusing on doing one of them well. It is better to focus on a single task at a time and finish that off. If at all you need to take another task in between, you must fully immerse in the second task and finish that off. Now you can go back to your first task.

“Most people have no idea of the giant capacity we can immediately command when we focus all of our resources on mastering a single area of our lives.”- Tony Robbins

How to Raise Your Consciousness – Go Beyond The Recent Past !

Give Your Life a Direction – A Commitment to Growth!