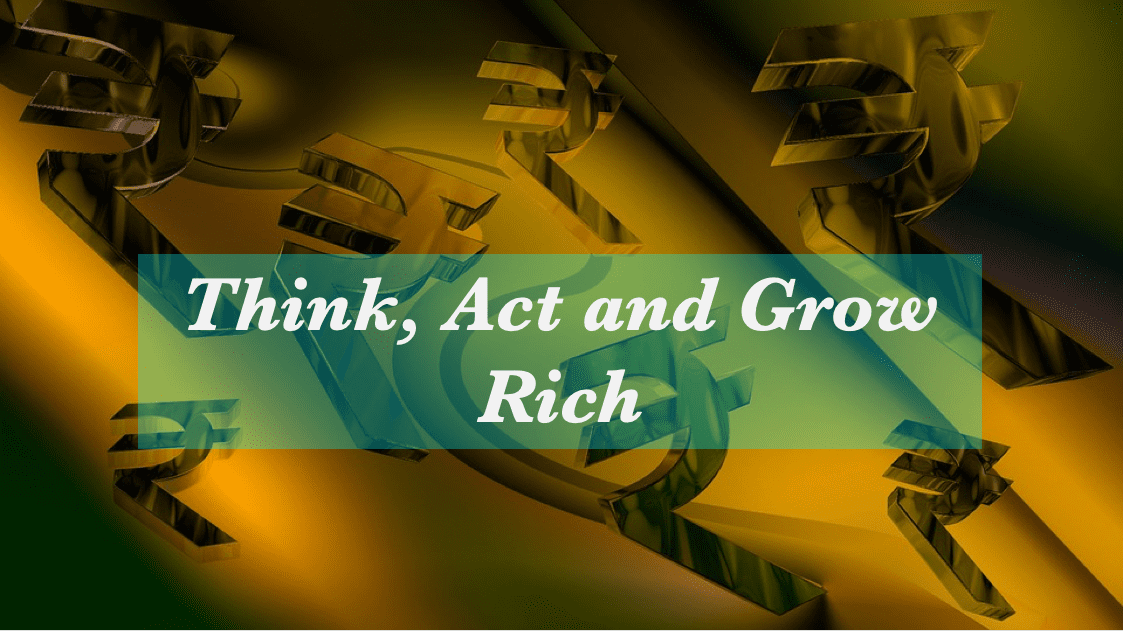 Think, Act, and Grow Rich! Thinking rather hard work is the first and foremost requirement in your journey towards richness. Whoever you are—regardless of your age, your education, or your occupation—you can attract wealth. Your positive belief about wealth will bring you wealth but at the same time, any negative belief about wealth will keep you in the same condition for a long time or lifetime.

It all starts with one thought at any moment of time in your life. If your start taking action based on that thought you can soon attain the path of wealth. Below is one real story about a person, who was admitted to the hospital. He had started reading one book there and began his journey towards richness. (Credit to book ‘Success Through a Positive Mental Attitude by Napoleon Hill and W. Clement Stone)

Time after time as we have studied the careers of successful men, we have discovered that they date their own success from the day they picked up a self-improvement book. Never underestimate the value of a book. Books are tools, providing inspiration that can launch you onto a bold new program and which can also light the dark days that any such program entails.

George Stefek was recovering at the Veterans Administration Hospital in Hines, Illinois. There he discovered by accident the value of thinking time. Financially—he was broke. While George was convalescing, he had a great deal of time on his hands. There wasn’t too much to do except read and think. He read Think and Grow Rich. And he was ready.

An idea occurred to him. Many laundries, George knew, fold their newly ironed shirts over a piece of cardboard to keep the shirts stiff and free from wrinkles. By writing a few letters, George learned that these shirt boards cost the laundries about $4.00 per thousand. His idea was to sell the boards for $1.00 a thousand; however, each one would carry an advertisement. The advertisers would, of course, pay for space, and George would make a profit.

George had an idea and he tried to make it work. When he left the hospital, he got into the action!

New in the advertising field, he had his problems. But he finally developed successful sales techniques through what others term “trial and error” and we term “trial and success.”

George continued the custom he had started in the hospital to engage in study, thinking, and planning time each day.

Even when George’s business was moving ahead swiftly, he decided to increase his sales by increasing the efficiency of his service. The shirt boards, when withdrawn from the shirts, were not retained by the laundries’ customers.

Now, he asked himself the question: “How can I get families to keep these shirt boards with the advertisements on them?” The solution flashed into his mind.

What did he do? On one side of the shirt board, he continued to print an advertisement in black and white or in colors. On the other side, he added something new—an interesting game for the children, a delicious recipe for the wife, or a provocative crossword puzzle for the whole family. George tells about one husband who complained that his laundry bill had gone up in a sudden, unaccountable way. Then he discovered that his wife was sending in shirts to the laundry which ordinarily he could have worn another day, just to get more of George’s recipes!

But George didn’t stop there. He was ambitious. He wanted to expand his business still further. Again he asked himself the question: “How?” And he found the answer.

George Stefek gave the entire $1.00 per thousand he received from the laundries to the American Institute of Laundering. The Institute, in turn, recommended that each member help himself and his trade association by using George Stefek’s shirt boards exclusively.

And thus George made another important discovery: the more you give of that which is good and desirable—the more you get!

Now a carefully planned thinking time session brought George Stefek considerable wealth. He discovered that a time apart is essential to any successful attraction of riches.

It is in quiet that our best ideas occur to us. Don’t make the mistake of believing that by a frantic kind of dashing around you are being your most effective and efficient self. Don’t assume that you are wasting time when you take time out for thought. The thought is the foundation upon which all else is built by man to grow rich.

Now it isn’t necessary for you to go to a hospital to establish the habit of reading good motivating books, to think or to make plans. And your thinking, study, and planning sessions need not be too lengthy. If you invest only one percent of your time in a study, thinking, and planning session it will make an amazing difference in the speed with which you reach your goals.

Your day has 1,440 minutes in it. Invest one percent of that time in a study, thinking, and planning session. And you will be astounded at what those fourteen minutes do for you. For it may surprise you to find that when you develop this habit you will receive constructive ideas almost any time or anywhere you might be: while doing the dishes, or riding the bus, or while taking a bath. This is the power of your subconscious mind.

Be certain to use two of the greatest, yet simplest working tools ever invented—tools used by a genius like Thomas Edison—a pencil and a piece of paper. For he always had handy—paper and pencil. And thus you, like him, will record the ideas that come to you day or night.

Another requirement to attract wealth is to learn how to set your goal. Across the world, less than 5 % of people have written financial goals for themselves, and most of the time they grow rich. Our mind has tremendous power to develop the thought process to initiate actions to achieve those goals. Remember, nothing moves in life without actions.

Set your mind on a definite goal and observe how quickly the world stands aside to let you pass.
― Napoleon Hill

Product vs Perception in Marketing