by Vinod Singh
in Grow Business
Reading Time:5min read
A A

In today’s world if somebody says that he or she is not having a good business idea then it seems vague. In the present scenario, things are changing rapidly and a lot of new opportunities are emerging. Space tourism is one of them. You can find more such business opportunities in the blog titled “Business now & future”.

How to Overcome the Fear of Communicating with Seniors!

How to Handle Stress at Work – Focus on Solutions, Not Problems!

Space tourism is a niche segment of the aviation industry that seeks to give tourists the ability to become astronauts and experience space travel for recreational, leisure, or business purposes. Not only does space tourism extend the freedom to travel into space for those with the means, but it also promises a profitable market to develop the launch vehicles necessary to expand life throughout the solar system.

Know the Edge of Space

The Kármán line or the most widely accepted boundary of space is located 100km above mean sea level. The US uses 80km as the cut-off point. Branson’s Virgin Galactic flight reached a height of 86km while Jeff Bezos’ Blue Origin flight went about 107km high. SpaceX’s Earth Orbit mission promises to take a look at our planet from over 300km up.

There are right now several companies, which are aggressively working in this area. Few of them had already completed their first human mission successfully. Their progress will decide whether space travel will one day become as accessible as air travel. The remaining are also very close. Each company is having its unique vision and mission.

On July 11, 2021, British businessman Richard Branson hurtled into space aboard his own rocket, and billionaire entrepreneur, Jeff Bezos, completed a spaceflight on July 20, 2021. Within nine days two extraordinary companies had created history in space tourism.

Virgin Galactic Holdings, Inc. is a vertically integrated aerospace and space travel company, pioneering human spaceflight for private individuals and researchers, as well as a manufacturer of advanced air and space vehicles. It is developing a spaceflight system designed to offer customers a unique and transformative experience.

Richard Branson’s trip to space and back lasted about 90 minutes from take-off to landing. The SpaceShip was separated 45 minutes after take-off and after reaching the required height, those on board experienced a few minutes of weightlessness before descending to the Spaceport in New Mexico.

“I really hope that there will be millions of kids all over the world who will be captivated and inspired about the possibility of them going to space one day.”- Richard Branson, Founder, Virgin Galactic

Blue Origin was founded by Jeff Bezos with the vision of enabling a future where millions of people are living and working in space to benefit Earth. In order to preserve Earth, Blue Origin believes that humanity will need to expand, explore, find new energy and material resources, and move industries that stress Earth into space. Blue is working on this today by developing partially and fully reusable launch vehicles that are safe, low cost, and serve the needs of all civil, commercial, and defense customers.

Blue Origin’s flight lasted around 10 minutes from launch to capsule touchdown in the desert.

“We’re committed to building a road to space so our children can build the future.”- Blue Origin

Space Adventures, Inc founded in 1998, is the world’s premier private spaceflight company and the only company to have arranged for private astronauts to fly to and live in space. They’ve been responsible for over half a dozen paid trips to the International Space Station (ISS) that made use of Russian spacecraft. A variety of other programs are such as circumlunar missions around the moon, zero gravity flights, cosmonaut training programs, spaceflight qualification programs, and reservations on future suborbital spacecraft.

SpaceX is an American aerospace manufacturer, space transportation services, and communications company headquartered in Hawthorne, California. SpaceX was founded in 2002 by Elon Musk with the goal of reducing space transportation costs to enable the colonization of Mars.

Elon Musk’s SpaceX is not aiming for short trips lasting minutes. Instead, the all-civilian missions are expected to last about a week from take-off to landing.

Axiom Space’s goal is to create the world’s first commercial space station. SpaceX and Axiom have inked a deal to send a crew of private citizens to the International Space Station (ISS) aboard SpaceX’s Crew Dragon capsule in October 2021. One seat on the 10-day trip would cost you $55 million. Travelers will spend two days moving to and from the space station, and eight onboard. The tourists will be accompanied by an Axiom astronaut who will make sure they don’t distract the ISS crewmembers.

Orion Span is a space travel company in the United States, which announced plans for a private commercial space station, called the Aurora Space Station. This would be placed in low Earth orbit and would effectively function as a space hotel, which would be able to host up to six space tourists at a time.

The Boeing Company emerged as a major player in the space tourism industry when it signed an agreement with NASA as part of its Commercial Crew Development programme. This programme was designed to increase involvement from private sector companies in the production of crew vehicles to be launched into orbit.

As part of the agreement, Boeing started work on the development of a crew capsule, called the Boeing CST-100 Starliner. Crucially, the company’s contract with NASA provides them with the opportunity to sell seats to space tourists, with the idea being that at least one space tourist would participate in each future space mission.

How much does it cost to go to space? 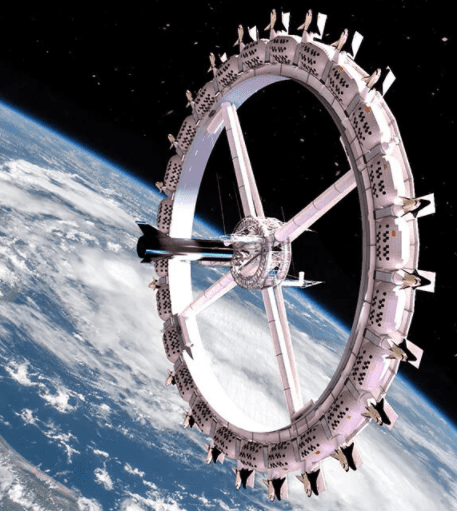 There are plenty of companies offering (very expensive) flights into space. Ranging from $100,000 to millions of dollars, different companies have a diverse price range for their space trips.

Seven tourists have traveled to the International Space Station (ISS) till now. The publicized price was in the range of US$20–25 million per trip. Unsurprisingly, commercial space travel remains the realm of the mega-rich.

The only market for humans-in-space potentially capable of sustaining thousands of flights per year is tourism if the cost is in the $100,000 range or less. If the price is in the $10,000 range, millions of flights can be supported.

It is worth pointing out that space tourism is likely to remain extremely expensive for the foreseeable future. It is also physically demanding, which will mean it will only be available to people who pass fitness tests and undergo training programs in preparation for their flight.

“Business opportunities are like buses, there’s always another one coming.” – Richard Branson

How to Overcome the Fear of Communicating with Seniors!

How to Handle Stress at Work – Focus on Solutions, Not Problems!

Stop Doing List – Why Is It Must For Extraordinary Results?

Stop Doing List - Why Is It Must For Extraordinary Results?

How to Improve the Performance? A Commitment Beyond Financial Aid!

[…] For so many companies growth patterns are stuck up in the long run as individuals are competing with each other to move up the corporate ladder. This factor remains in the mind of each person instead of focusing on the future of the business. Another day I was watching the Jeff Bezos interview. One line which really rewinds again and again in my mind is like “For my business, I live in the future most of the time and my business executives also follow this.” With this thought process, you can imagine the growth & presence of Amazon across the world. And the entry of Jeff Bezos in a new venture like Blue Origin, which is completely a future-oriented business. Blue origin is engaged in space tourism. […]