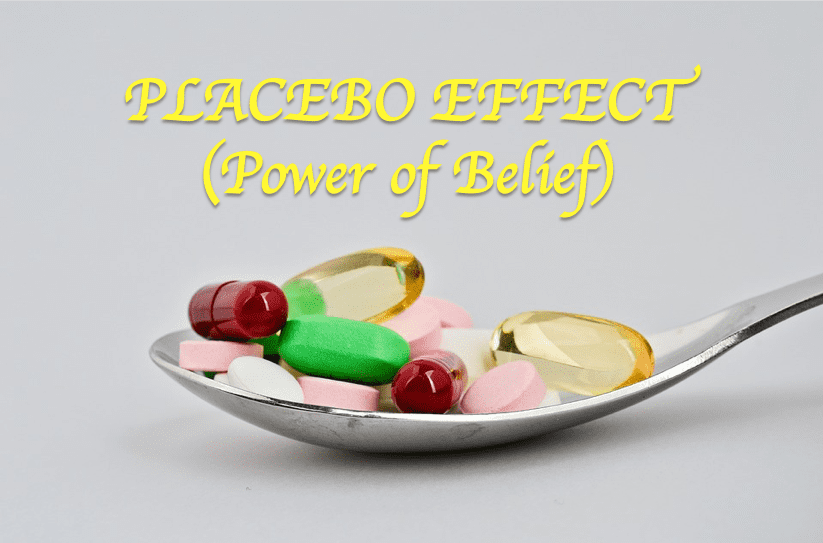 When a patient get the treatment for particular disease, he or she get healed from the that treatment. This treatment work in two direction, one is medical effect of those medicine and other one is perception (belief) of that patient that given medicine will cure him or her.

Many a time the perception (belief) is positive, which support the treatment. But other time it can be negative and create side-effects for given treatment.

Like if we have faith in particular doctor, that whenever you take treatment from him, within one or two days you get cure. This perception are some time so strong that even that doctor gives you sugar pills, you will be cured. This miracle happen in real life! We shall call it placebo effect. There are few other terminology for this effect as perception effect or belief effect.

On other side, if patient is getting treatment from doctor, but he is not having faith in that treatment or in that doctor, treatment may not work at all or take longer duration. This negative effect is called as nocebo effect.

The placebo effect is the positive effect on a person’s health experienced after taking a placebo. It is triggered by the person’s belief in the benefit from the treatment and their expectation of feeling better, rather than the characteristics of the placebo.

A placebo is a substance or treatment which is designed to have no therapeutic value. Common placebos include inert tablets (like sugar pills), inert injections (like saline), sham surgery, and other procedures.

A nocebo effect occurs when the recipient of an inert substance reports a negative effect or a worsening of symptoms, with the outcome resulting not from the substance itself, but from negative expectations about the treatment.

Nocebo, A negative placebo effect as, for example, when patients taking medications experience adverse side effects unrelated to the specific pharmacological action of the drug.

During their medical study, every student learns, that the mind can affect the body. They learn that some people get better when they believe (falsely) they are getting medicine.

In the words of Bruce H Lipton, “The placebo effect should be a major topic of study in medical school. I believe that medical education should train doctors to recognize the power of our internal resources. Doctors should not dismiss the power of the mind as something inferior to the power of chemicals and the scalpel”.

Placebo effect not only work in general treatment but also in surgery. Below case study is illustrated in book titled “The Biology of Belief”, written by Bruce H Lipton.

“A Baylor School of Medicine study, published in 2002 in the New England Journal of Medicine, evaluated surgery for patients with severe, debilitating knee pain. (Moseley, et al, 2002) The lead author of the study, Dr. Bruce Moseley, “knew” that knee surgery helped his patients: “All good surgeons know there is no placebo effect in surgery.” But Moseley was trying to figure out which part of the surgery was giving his patients relief. The patients in the study were divided into three groups. Moseley shaved the damaged cartilage in the knee of one group. For another group, he flushed out the knee joint, removing material thought to be causing the inflammatory effect. Both of these constitute standard treatment for arthritic knees. The third group got “fake” surgery. The patient was sedated, Moseley made three standard incisions and then talked and acted just as he would have during a real surgery—he even splashed salt water to simulate the sound of the knee-washing procedure. After forty minutes, Moseley sewed up the incisions as if he had done the surgery. All three groups were prescribed the same postoperative care, which included an exercise program.

The results were shocking. Yes, the groups who received surgery, as expected, improved. But the placebo group improved just as much as the other two groups! Despite the fact that there are 650,000 surgeries yearly for arthritic knees, at a cost of about $5,000 each, the results were clear to Moseley: “My skill as a surgeon had no benefit on these patients. The entire benefit of surgery for osteoarthritis of the knee was the placebo effect.”

Television news programs graphically illustrated the stunning results. Footage showed members of the placebo group walking and playing basketball, in short doing things they reported they could not do before their “surgery.” The placebo patients didn’t find out for two years that they had gotten fake surgery. One member of the placebo group, Tim Perez, who had to walk with a cane before the surgery, is now able to play basketball with his grandchildren. He summed up the theme of this book when he told the Discovery Health Channel: “In this world anything is possible when you put your mind to it. I know that your mind can work miracles.”

Studies have shown the placebo effect to be powerful in treating other diseases, including asthma and Parkinson’s. In the treatment of depression, placebos are stars. So much so that psychiatrist Walter Brown of the Brown University School of Medicine has proposed placebo pills as the first treatment for patients with mild or moderate depression. (Brown 1998) Patients would be told that they’re getting a remedy with no active ingredient, but that shouldn’t dampen the pills’ effectiveness. Studies suggest that even when people know they’re not getting a drug, the placebo pills still work.”

Perception of new place (No Sleep)!

Many a time, some of our friends or relative create perception that they are not able to sleep well at new places. When I was speaking about this perception based effect, one of my relative shared a real incident. Her sister’s mother-in-law visited her home, as that place was new to mother-in-law, she cited several times she will not be able to sleep. This happens to her be at each new place, unless she consume sleeping pills. On that particular day, no sleeping pill was available, the result, she almost awake full night.

In my opinion this is mere false belief set by her in mind and most of you now know, how are beliefs works. Whatever we plant in our beliefs (positive or negative), our subconscious mind support them irrespective of their nature. Power of Imagination in Financial Success!

[…] The genetics of the cell give us all kinds of potentials. The potentials expressed are related to the composition of the culture medium. The culture medium composition in a laboratory is synthesized by me—synthetic blood. In your natural skin-covered Petri dish, or body, the brain is the chemist and it translates your perception into chemistry that complements that perception. The result is that your biology becomes complementary to your mind and its perception, hence the nature of what is called the placebo effect. […]