In any business, competition is a buzzword. Conventional wisdom says that to beat your competitors, you need to one-up them. If they have four features, you need five. If they’re spending $20,000, you need to spend $30,000. And if they have fifty employees, you need a hundred. We target the weak zone of competitors and try to gain our pie in that. If they are having poor aftersales service, then we focus on that.

This Cold War mentality of one-upping is a dead end to the business. When you get suckered into an arms race, you wind up in a never-ending battle that costs you massive amounts of money, time, and drive. And it forces you to constantly be on the defensive, too. Defensive companies can’t think ahead; they can only think behind. They don’t lead but they follow. And they always wait for their competitor’s next movement.

So what do you do instead? Do less than your competitors to beat them. Solve the simple problems and leave the hairy, difficult, nasty problems to the competition. Instead of one-upping, try one-downing. Instead of outdoing, try underdoing. When two companies are bidding for one complex project, then any one of them can use this strategy. If the project is having complexity and involves high capital investment, then one company that is having other good projects in kitty can bid strategically to lose the order. With this other company will win the order and face all the consequences. 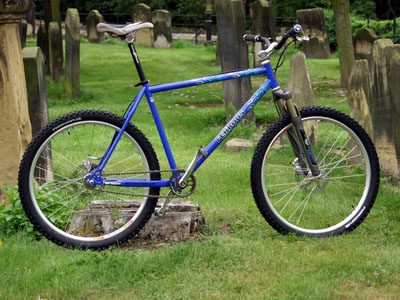 The bicycle world provides a great example. For years, major bicycle brands focused on the latest in high-tech equipment: mountain bikes with suspension and ultra-strong disc brakes, or lightweight titanium road bikes with carbon-fiber everything. And it was assumed that bikes should have multiple gears: three, ten, or twenty-one.

But recently, fixed-gear bicycles have boomed in popularity, despite being as low-tech as you can get. These bikes have just one gear. Some models don’t have brakes. The advantage: They’re simpler, lighter, cheaper, and don’t require as much maintenance. (Image credit -Wikipedia)

Another great example of a product that is succeeding by underdoing the competition: the Flip—an ultrasimple, point-and-shoot, compact camcorder that’s taken a significant percentage of the market in a short time. Look at all the things the Flip does not deliver: big screen, photo-taking ability, menus, setting, video light, viewfinder, special effects, headphone jack, lens cap, memory card, optical zoom.

The Flip wins fans because it only does a few simple things and it does them well. It’s easy and fun to use. It goes places a bigger camera would never go and gets used by people who would never use a fancier camera.

Don’t shy away from the fact that your product or service does less. Highlight it. Be proud of it. Sell it as aggressively as competitors sell their extensive feature lists.

Are You Analyzing the Competition?

Who cares what they’re doing? In the end, it’s not worth paying much attention to the competition anyway. Why not? Because worrying about the competition quickly turns into an obsession. What are they doing right now? Where are they going next? How should we react?

Every little move becomes something to be analyzed. And that’s a terrible mindset. It leads to overwhelming stress and anxiety. That state of mind is bad soil for growing anything. It’s a pointless exercise anyway. The competitive landscape changes all the time. Your competitor tomorrow may be completely different from your competitor today. It’s out of your control and sometimes beyond your imagination. What’s the point of worrying about things you can’t control?

Another example we can take is high-quality road and hotel business. With high-quality roads, it becomes easy to go from one place to other. It saves a lot of time in traveling. With this people start early and try to return to their home on the same day. This is not possible when the road condition is not good. In that case, traveling time becomes high, and staying in a hotel becomes mandatory.

Shift the Focus from ‘They’ to ‘You’

Focus on yourself instead. What’s going on in here is way more important than what’s going on out there. When you spend time worrying about someone else, you can’t spend that time improving yourself. Focus on competitors too much and you wind up diluting your own vision. Your chances of coming up with something fresh go way down when you keep feeding your brain other people’s ideas. You become reactionary instead of visionary. You wind up offering your competitor’s products with a different coat of paint.

If you’re planning to build “the iPod killer” or “the next Pokemon,” you’re already dead. You’re allowing the competition to set the parameters and wishing to surpass them. Basically, they’re defining the rules of the game. And you can’t beat someone who’s making the rules. You need to redefine the rules, not just build something slightly better.

Don’t ask yourself whether you’re “beating” Apple (or whoever the big boy is in your industry). That’s the wrong question to ask. It’s not a win-or-lose battle. Their profits and costs are theirs. Yours are yours.

If you’re just going to be like everyone else, why are you even doing this? If you merely replicate competitors, there’s no point to your existence. Even if you wind up losing, it’s better to go down fighting for what you believe in instead of just imitating others. (Excerpt is from ‘Rework’ by Jason Fried)

“World trade means competition from anywhere; advancing technology encourages cross-industry competition. Consequently, strategic planning must consider who our future competitors will be, not only who is here today.” – Eric Allison, Uber