Organizational Mindsets (Growth vs Fixed)! – Which one is better? 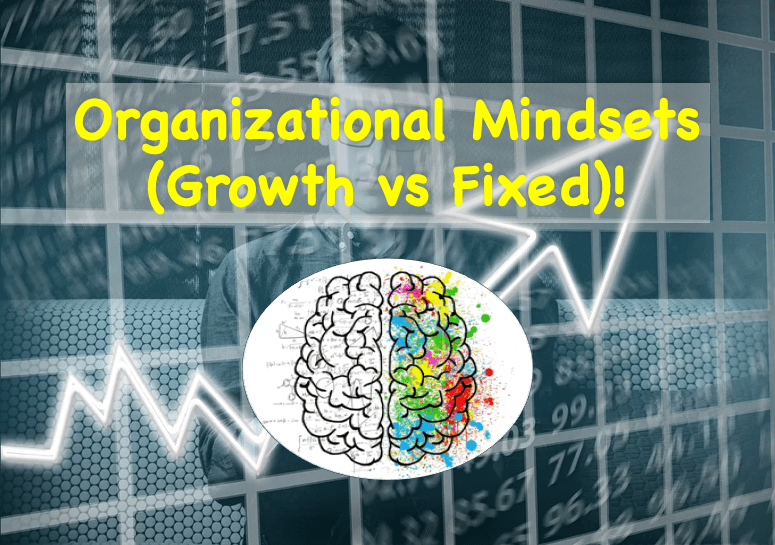 One of the classic explanations of organizational mindset is given by Carol Dweck in her book titled “Mindset: Changing The Way You think To Fulfil Your Potential”. This book is highly recommended by Satya Nadella (Chief Executive Officer of Microsoft)

When we talked about Lou Gerstner (former chairman of the board and chief executive officer of IBM) and Anne Mulcahy (former chairperson and CEO of Xerox Corporation), we saw the kind of company they wanted to create—and did create. These were companies that embraced the development of all employees and not the worship of a handful of anointed “geniuses.” This raised a question.

To find out, we studied a group of large corporations consisting of Fortune 500 and Fortune 1000 companies. An organization might embody a fixed mindset, conveying that employees either “have it” or they don’t: We called this a “culture of genius.” Or it might embody more of a growth mindset, conveying that people can grow and improve with effort, good strategies, and good mentoring: We call this a “culture of development.”

To determine a company’s mindset, we asked a diverse sample of employees at each organization how much they agreed with statements like these: When it comes to being successful, this company seems to believe that people have a certain amount of talent, and they can’t really do much to change it (fixed mindset). This company values natural intelligence and business talent more than any other characteristics (also a fixed mindset). This company genuinely values the personal development and growth of its employees (growth mindset).

We then compiled the responses and they revealed something important: There was a strong consensus within each company about whether the company had fixed or growth mindset beliefs and values. We were now ready to examine the impact of the company’s mindset—on employees’ trust in the company, on their sense of empowerment and commitment, and on the level of collaboration, innovation, and ethical behaviour that was embraced in the organization.

It’s nice that employees in growth-mindset organizations feel trusting and committed, but what about agility and innovation? That’s something that organizations should and do care greatly about these days. Perhaps a company has to sacrifice some comfort and loyalty to be on the leading edge. Perhaps a belief in fixed talent motivates innovation.

It doesn’t look that way.

It’s actually the employees in the growth-mindset companies who say that their organization supports (reasonable) risk-taking, innovation, and creativity. For example, they agreed far more strongly with statements like this: “This company genuinely supports risk-taking and will support me even if I fail” and “People are encouraged to be innovative in this company—creativity is welcomed.”

Employees in the fixed-mindset companies not only say that their companies are less likely to support them in risk-taking and innovation, they are also far more likely to agree that their organizations are rife with cutthroat or unethical behaviour: “In this company there is a lot of cheating, taking shortcuts, and cutting corners” or “In this company, people often hide information and keep secrets.” It makes a lot of sense when you think about it. When organizations put the premium on natural talent, then everyone wants to be the superstar, everyone wants to shine brighter than the others, and people may be more likely to cheat or cut corners to do so.

Our findings tell us that it’s possible to weave a fixed or growth mindset into the very fabric of an organization to create a culture of genius or culture of development. Everybody knows that the business models of the past are no longer valid and those modern companies must constantly reinvent themselves to stay alive. Which companies (organizational mindsets) do you think to have a better chance of thriving in today’s world?

“It’s not that I’m so smart, it’s just that I stay with problems longer.” – Albert Einstein

Keep Away from Blame, Justification & Complain !

Placebo Effect (Power of Belief) – A psychology of medical treatment

Placebo Effect (Power of Belief) - A psychology of medical treatment

[…] What took Azur two months takes Chuma’s machine two days. After 40 days, Chuma and his machine accomplish as much as Azur’s three years of toilsome work. The revelation destroys Azur. He spent years doing the heavy lifting while Chuma built a machine to do it for him. Instead of honoring the machine and Chuma’s action plan, Azur stubbornly vows, “I must get stronger! I must lift heavier stones!” He continue work in this fixed mindset. […]

Which One is more Powerful Idea or Execution ! - Fastlane Freedom

[…] TIME is a big factor here and we many a time lose much of it. It really depend on the individual who dare to question the routine. Then those individual put effort to bring improved version of that activity. These individuals can be at any stage of hierarchy in organization. […]