Missing Link Between You and Your Success!

by Vinod Singh
in Mindfulness
Reading Time:6min read
A A

While reading one book, I got the reference of another book. I think this is the best way to get your next book on the reading list. It was titled “The Ultimate Secret to Getting Absolutely Everything You Want” by Mike Hernacki. I decided to go through this book. It’s a costly book and audio is even 25 times more costly than hardcopy. Surprisingly, this book is having only 98 pages.

This blog is not about book review but to provide you the missing link between you and your success. There are simple but outstanding principles that you can apply from this book to achieve your goals. Till now I have gone through more than 98 books, Most of these books are related to Mind Power, Money, and Business, Management topics, etc. In some areas of my life, I got phenomenal results from these books by implementing the principle described in them. But still, the struggle is ON in few other areas. After reading this book, I could realize the perfect connecting link between myself and my goals.

Action Plan List is Not the Key to Success

We shall understand this with one example. Just assume that you are working in one well-known organization, and you have a goal to become Chief Executive Officer (CEO) in your mind. You have prepared a plan to accomplish that goal. Your plan consists of a list of 40 actions, which you need to take to reach the post of CEO.

These actions may be like working 12 hours per day, relocation from your existing living city, one additional education degree, working in different departments to get good exposure, improving networking, doing best in each role, etc.

What Mike Hernacki says is that even such preparation is not required because if you miss even one or two actions, then you are creating doubt on your success. In case of doubt, your subconscious mind gets contradictory inputs. On one side you want that success, but on another side, you are creating doubt to achieve that. In case of contradiction, the subconscious mind stops developing or supporting you to achieve your goals.

What You Need to Do Is This

You have to become committed to achieving your goals. You need to show your 100% willingness (unshakable faith) to achieve your goals. The goal may be short-term or long-term, but it’s your commitment which decides the success rate. Commitment, like doing whatever it takes to achieve those goals but without any illegal or unethical practice.

Even if you have not prepared any action list, but with commitment, you will resolve all the hurdles on the way. I am not saying that you need not to make any action list. Those action lists will definitely help you to achieve the goal, but do not limit yourself to only those actions. Be bold and ready to solve all the issues during the process towards reaching your goal.

“Commitment is what transforms a promise into a reality.” – Abraham Lincoln

You will realize that once you commit to achieving your goal, then you need to accomplish only a fraction of planned actions to achieve your goals. Like in the above example of becoming CEO, you may not to work 12 hours a day or you may not to relocate. But remember, you were mentally ready for all those actions.

How Does It Work?

The concept of thoughts as things

What is your opinion on thoughts? Are thoughts physical? You can write or speak your thoughts but it is very difficult to prove that thoughts are physical. One group of people believe that thoughts are physical but another group differs in that opinion. Now for time being let’s assume that you are with the first group of people, which assume thoughts are physical. From ancient times, such people have believed that their thoughts have an objective reality, an existence apart from the mind that conceived them. In other words, thoughts are things to these people. So as a physical thing, all the physical laws that govern every single thing in the entire universe, applies to them as well. One of that universal laws is extremely important. It’s the law of attraction.

The law of attraction

Simply stated, the law is this: Things attract other things. From the largest planet to the tiniest microbes, attraction rules them all. The formula that expresses the force of this attraction in mathematical terms:

M1, M2 = Masses of the two things being attracted to each other

This force is at work all the time, drawing all things towards one another. When applied to thoughts, the law means that whenever we think something, the thought immediately attracts its physical equivalent.

– When you think of something- like its personal fortune of a hundred million dollars or 100 crore rupees- that thought immediately begins attracting its physical equivalent. This amount may seem a long, long way from where you are. The prospect of you physically having that fortune seems quite dim.

But never fear; you have help called accelerating acceleration –

“When things begin moving towards each other, they move at an ever-increasing rate”

Not only are the thing themselves moving faster, but their rate of movement is getting faster with each passing moment. Many a multimillionaire has told how it took fifteen or twenty years to make the first million, several years to make the second, a few months to make the third, then very little time for other millions to come flying in. 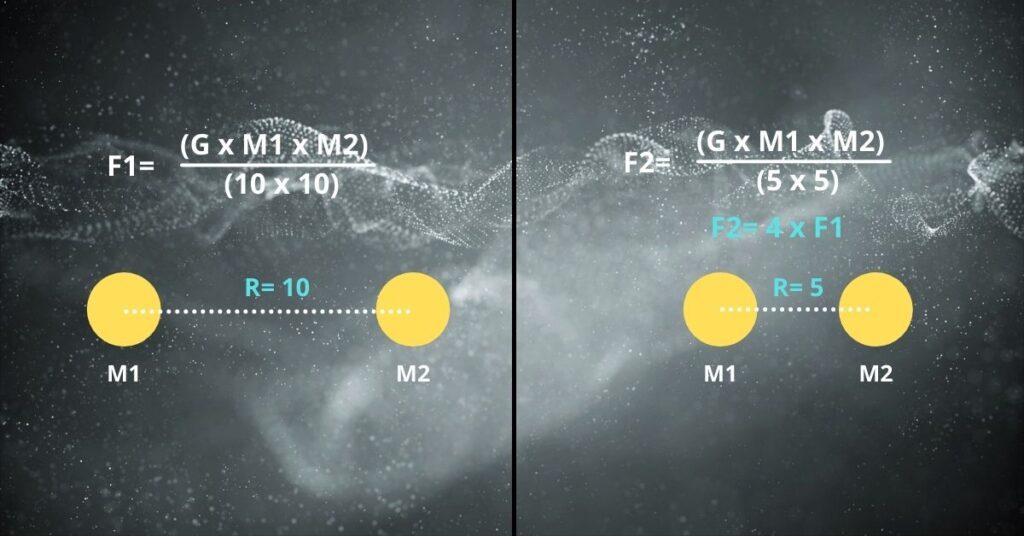 This means, with G, M1, and M2 staying the same, and the distance between the two M’s cut half (from 10 to 5), then the value of F2 is four times the value of F1. With each reducing distance, the force value increases multiple times.

The power of an open mind

By the time people reach adulthood, most have their minds made up on life’s major issues and would rather not be bothered with changing their minds. Yet an open mind is like an open window. It lets the fresh air in. An open mind allows the law of attraction to work without interference. It allows the phenomenon of accelerating acceleration to run free. When you keep an open mind, you permit your thought to find their physical equivalent in ways a closed mind may not have consciously thought possible.

Your open mind is a window to the limitless possibilities in the universe. It’s what makes everything else work- the concept, the law, the phenomenon, even the secret itself.

Once you show your willingness with 100 % commitment, the desired things will rapidly come to you with the above principle. You cannot imagine the speed, so make yourself ready to accept them.

How to Raise Your Consciousness – Go Beyond The Recent Past !

[…] “The road to success and the road to failure are almost exactly the same.”- Colin R. Davis […]

[…] “Success usually comes to those who are too busy to be looking for it.” – Henry David Thoreau […]

[…] Missing Link Between You and Your Success! […]