by Vinod Singh
in Money
Reading Time: 5min read
A A
0

The first step in your financial freedom journey starts with keeping aside a part of your earning. This money starts earning for you for life long. What if, you still haven’t taken that first step to set aside a percentage of your earnings to save for compounded interest? Is there something holding you back? What’s really going on? Could it be that you’re not systematically saving money because it feels like a sacrifice—a loss—instead of a gift to yourself today and in the future?

Shlomo Benartzi of the UCLA Anderson School of Management has shared insightful answer to the above questions. He said, “The problem is people feel like the future is not real. So it’s hard to save for the future.” Benartzi and his colleague, Richard Thaler of the University of Chicago, came up with an amazing solution called Save More Tomorrow (SMarT) with a simple but powerful premise: if it hurts too much to save more money now—just wait until your next pay raise.

Save More Tomorrow is a behavioral intervention designed to make saving for retirement as easy and painless as possible. The intervention consists of a few central components. First, ask people to commit now to saving more in the future. This helps them avoid present bias. Second, planned increases in savings rates are linked to future pay raises. This minimizes the influence of loss aversion since take-home pay never decreases. Save More Tomorrow allows workers to make financial decisions closely aligned with their financial needs and long-term goals.

This “nudge” has gone on to achieve a massive scale. In 2006, it was enshrined into law as part of the Pension Protection Act of 2006 (USA), which encouraged companies to adopt the core principles of the program. Save More Tomorrow has helped several millions of people across the world to significantly boost their savings rate. (Content inspired from ‘MONEY Master the Game: 7 Simple Steps to Financial Freedom’ by Tony Robbins).

How did they come up with it? First, Shlomo told Tony, they had to address the challenge of immediate gratification, or what scientists call “present bias.” He gave an example: when he asked a group of students whether they wanted a banana or some chocolate for a snack, a full 75% said they wanted a banana. But two weeks later, with the choices in front of them, 80% picked the chocolate! “Self-control in the future is not a problem,” said Shlomo. It’s the same with saving, he told me. “We know we should be saving. We know we’ll do it next year. But today we go and spend.”

The Evolution of Bitcoin – A Highest Market Value Cryptocurrency

Pay Yourself First – Practice It to Achieve Financial Freedom!

When You Have a Lemon, Make Lemonade (Turn Your Minus into Plus)

How Does the Stock Market Works? Know It Before Investing

As a species, we’re not only wired to choose today over tomorrow, but also we hate to feel like we’re losing out on something. To illustrate the point, Shlomo told me about a study in which monkeys—our not-so-distant cousins—were given an apple while scientists measured their physiological responses. Enormous excitement! Then another group of monkeys was given two apples. They also displayed enormous excitement. And then one change was made: the monkeys that were given two apples had one taken away from them. They still had one apple, but what do you think happened? You guessed it. They were angry as hell! (Scientifically speaking.) Think this happens with people, too? In fact, how often does this happen with the average person? We forget what we already have, don’t we?

The bottom line is, if we feel like we’re losing something, we avoid it; we won’t do it. That’s why so many people don’t save and invest. Saving sounds like you’re giving something up, you’re losing something today. But you’re not. It’s giving yourself a gift today of peace of mind, of certainty, of the large fortune in your future.

How Does It Work?

Benartzi and Thaler get around the above challenges & come up with a simple system to make saving feel painless. It aligns with our natures. As Shlomo said in a TED Talk, “Save More Tomorrow invites employees to save more maybe next year—sometime in the future when we can imagine ourselves eating bananas, volunteering more in the community, exercising more, and doing all the right things on the planet.” Here’s how it works: you agree to automatically save a small amount of your salary—10%, 5%, or even as little as 3%. (This is a number so small you won’t even notice the difference!)

Then you commit to saving more in the future—but only when you get an increase in pay. With each pay raise, the percentage saved would automatically get a little larger, but you wouldn’t feel it as a loss, because you never had it in the first place! Benartzi and Thaler first tested the Save More Tomorrow plan almost 20 years ago at a company in the Midwest where the blue-collar workers said they couldn’t afford to squeeze another dime out of their paychecks. But the researchers persuaded them to let their employer automatically divert 3% of their salaries into a retirement account, and then add 3% more every time they got a pay raise. The results were amazing! After just five years and three pay raises, those employees who thought they couldn’t afford to save were setting aside just under a whopping 14% of their paychecks! And 65% of them were actually saving an average of 19% of their salaries.

A Real Story for UPS Man

When you get to 19%, you’re approaching the kinds of numbers that made Theodore Johnson, the UPS man, incredibly wealthy. Theodore Johnson worked for UPS and never made more than $14,000 a year and yet, in his old age, was worth more than $70 million. When he said he had no money to save, a friend told him that if he were taxed, the money would be taken out of his account and he’d never see it. So he created a tax for himself to make him wealthy. Even though he made little money, he took 20 percent of his money and it went straight into an investment account. Over more than five decades, that compounded to make him $70 million.

Just go ahead and implement Save More Tomorrow in your life to enjoy financial freedom. It’s painless, and it works. It’s been proven time and again. Below is the chart that Shlomo uses to illustrate the impact that each increase in savings will have on an employee’s lifestyle. At 3%, there’s an image of a pair of sneakers—because that’s all you’ll be able to afford if you save only 3%! At 9%, there’s a scooter. It goes all the way up to 14%, where there’s a luxury car and the clear message that life is great! That’s a big difference! 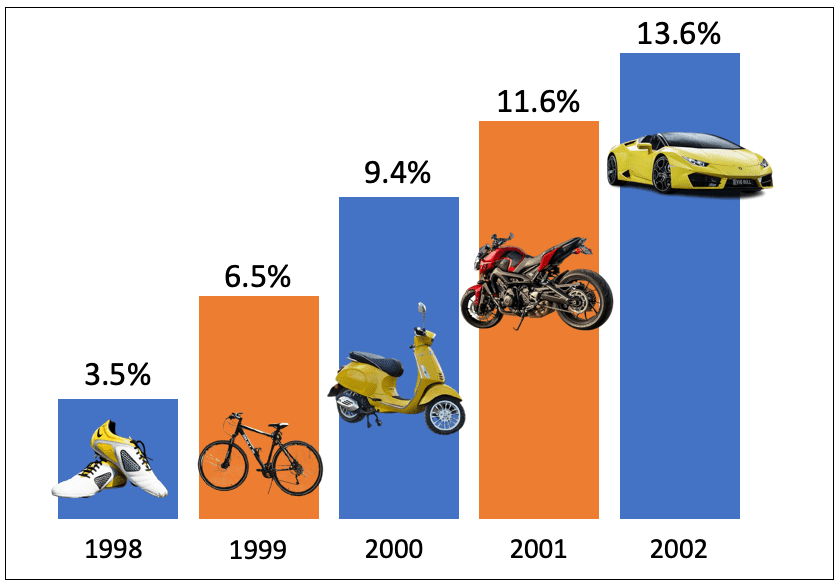 “Investing should be more like watching paint dry or watching grass grow. If you want excitement, take $800 and go to Las Vegas.” – Paul Samuelson

The Evolution of Bitcoin – A Highest Market Value Cryptocurrency

Pay Yourself First – Practice It to Achieve Financial Freedom!

When You Have a Lemon, Make Lemonade (Turn Your Minus into Plus)

How Does the Stock Market Works? Know It Before Investing