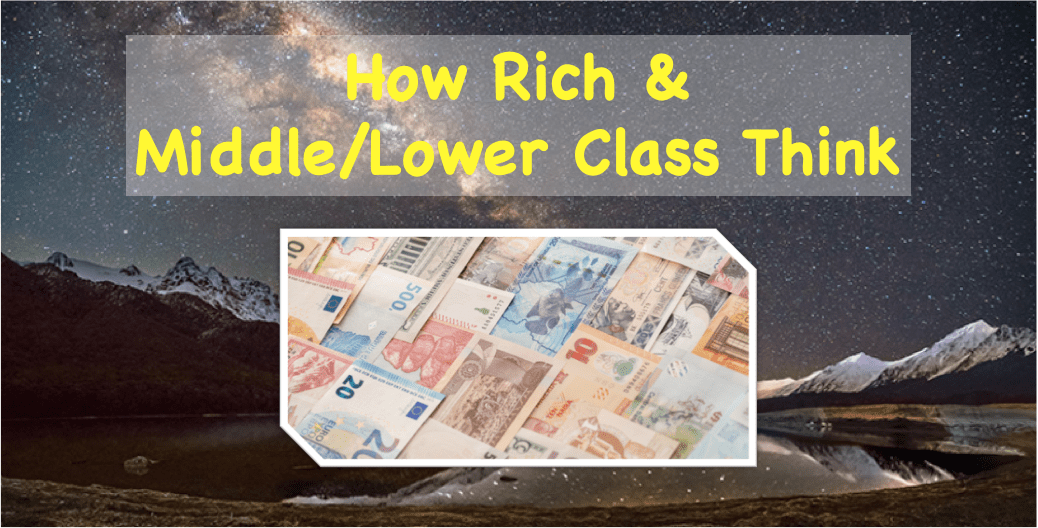 There is vast difference in thinking of Rich people and middle/lower class people about money. Steve Siebold, a self-made multi-millionaire, had done research for 30 years on this topic by interviewing more than 1,200 of world’s wealthiest people. He has compiled all this work in outstanding book titled ‘How Rich People Think’.

I read this book few year back and implementing some of the outstanding wisdom from it to change my own thinking. Believe me, I have been benefited from this in multifaceted dimension of life, especially about financial life.

With some of my ‘mind’ related blogs, you can now co-related that it’s the only thought process / beliefs which make major difference in our life. People remain in middle or lower class for lifetime because they are not able to change their false beliefs about money. They meet with opportunities several times in life, but they are not having confidence to take up that opportunity.

They always have belief of fear, if this doesn’t not work then what? Middle /Lower class always seek for security at each stage of life, this thought process keep them in same lifestyle for entire life.

Majority of peoples are driven by the fear of loss and uncertainty of the future, so they focus on how to protect and hoard their money. While world-class (rich) thinkers understand the importance of saving and investing, they direct their mental energy toward accumulating wealth through serving people and solving problems.

When an economic correction occurs, the fear-based saver suffers catastrophic losses that may take years to recover. While world-class thinkers suffer similar losses, they quickly turn their attention to financial opportunities that present themselves in a society of suddenly terrified people. While the majority of peoples are selling for short-term survival, the great ones are buying for long-term success.

One group is operating from fear, the other, from abundance. The self-made rich aren’t afraid to take calculated risks, because they know if they lose they can make it all back. While the middle class is always looking for the home run investment that will make them wealthy, the world class invests wisely, knowing the bulk of their fortune will come from the service they provide.

Even in the midst of a cash flow crisis, the rich reject the nickel and dime thinking of the majority of peoples. They are masters at focusing their mental energy where it belongs: on the big money.

The majority of peoples trade time for money. This creates the belief that making money is a linear process directly connected to time. The average person believes the only way to earn more money is to work more hours, with the exception of raises and bonuses. The wealthy know big money requires thinking about it in non-linear terms. The great ones are masters at generating money through ideas that solve problems. They realize since there is no limit to ideas, there is no limit to how much money they can earn.

So while the middle class is scrambling to survive and frightened for their financial future, the world class is capitalizing on their elevated level of awareness. The majority of peoples waste a substantial percentage of their mental energy worrying about money, while the champions are fearlessly directing their focus to becoming wealthier every day. Fortunes can be created almost overnight with the right idea at the right time, but only if the performer understands this non-linear phenomena.

Since most people think of making money in a linear fashion, they never invest the necessary effort to create high impact solutions. The truth is, people who educate themselves in this philosophy have the potential to become as wealthy as they wish.

If hard work was the secret to financial success, every construction worker and cocktail waitress would be rich. The wealthy strategically focus their efforts on the most profitable areas of their business while leveraging their contacts, credibility and resources to maximize the results of every action they take. Rich performers work hard, but not in the traditional sense. Hard work to the wealthy means out-thinking their competitors and leveraging the collective brainpower of their advisors.

The middle class sees hard work as a badge of honour. The world class sees success as a more important badge of honour. While one group is mentally and physically exhausted at the end of the day, the other is fresh and excited about thinking of new solutions and ideas that will keep the first group employed. As a result, the middle class lives pay cheque to pay cheque and the world class lives without limits. The only real difference lies in their approach and ability to use leverage in place of linear effort.

The average person is playing life’s proverbial slot machine, while the wealthy own the slot machines. The beauty of living in a capitalistic society is that anyone in the middle class is free to make the necessary changes in their thinking to capitalize on the concept. Most people won’t do it because they are either unaware of how they can think differently, or don’t believe it’s possible. Either way, the wealthy will continue to amass fortunes while the majority sit on the sidelines worrying about how to pay their bills.

Root of Evil, Money or (Poverty)!

The average person has been brainwashed to believe rich people are lucky or dishonest. The biblical passage that states the love of money is the root of all evil has been misquoted by many to say that money itself is the root of all evil. As a result of poor programming and ignorance, the masses are infected with the disease of focusing on lack and limitation regarding money and are uneducated about what it means to be wealthy. The world class knows that while having money doesn’t guarantee happiness, it does make your life easier and more enjoyable.

Rich people consciously build beliefs about money that serve their best interests and help them develop substantial sums. It’s not intelligence or education that holds back the average person from getting rich, it’s the middle-class beliefs around money that keep them struggling to survive in a world of abundance.

If you want world-class wealth, copy the beliefs of the wealthy, knowing you will eventually begin to behave based on those beliefs. While the majority are searching for the answer on the outside, the great ones know building wealth starts on the inside. First you build world-class beliefs around money, then you take action based on those beliefs. Your results will follow your actions.

“People with leverage have dominance over people with less leverage. In other words, just as humans gained advantages over animals by creating leveraged tools, similarly, humans who use these tools of leverage have more power over humans that do not. Saying it more simply, ‘leverage is power’.”— Robert Kiyosaki