by Vinod Singh
in Money
Reading Time: 6min read
A A
0

Forbes’ billionaires list-2021 show us ways that in today’s world anything is possible in the term of money. Money is flowing abundantly in the air, now it’s the individual’s capacity to grab it. Recently we have seen that the net worth of individuals increases by $ 50 billion ($1 billion > ₹ 7000 crores) in less than a year.  It’s also evident that more than 75 % of new billionaires are self-made. Don’t you think that there are huge opportunities around the world nowadays?

Despite the pandemic, it was a record-setting year for the world’s wealthiest—with a $5 trillion surge in wealth and an unprecedented number of new billionaires.

It’s been a year like no other, and we aren’t talking about the pandemic. There were rapid-fire public offerings, surging cryptocurrencies, and skyrocketing stock prices. The number of billionaires on Forbes’ 35th annual list of the world’s wealthiest exploded to an unprecedented 2,755—660 more than a year ago. Altogether they are worth $13.1 trillion, up from $8 trillion on the 2020 list.

New Billionaire in every 17 Hours

There are a record-high 493 newcomers to the list—roughly one new billionaire every 17 hours, including 210 from China and Hong Kong and 98 from the U.S. The richest newcomer, at $38.2 billion, is Miriam Adelson of Nevada, who inherited her husband Sheldon Adelson’s casino empire following his death in January. Other notable new entrants include movie and TV producer Tyler Perry, Bumble dating app co-founder Whitney Wolfe Herd—the world’s youngest self-made woman billionaire, and Europe’s Guillaume Pousaz, founder of payments firm Checkout.com. Another 250 people who’d fallen off the billionaires’ list in the past came roaring back. Altogether, a staggering 86% of all billionaires are richer than a year ago.

Jeff Bezos is the world’s richest person for the fourth year running, worth $177 billion, up $64 billion from a year ago as a result of surging Amazon shares. Elon Musk—the biggest gainer in dollar terms—rocketed into the No. 2 spots with a $151 billion fortune, a whopping $126.4 billion more than a year ago, when he ranked No. 31 and was worth $24.6 billion. The main reason: a 705% climb in Tesla shares. French luxury goods tycoon Bernard Arnault holds onto his spot at No. 3 but his fortune nearly doubled to $150 billion, from $76 billion, due to an 86% rise in the shares of LVMH, owner of brands including Louis Vuitton and Christian Dior and cosmetics retailer Sephora. The top ten richest are worth $1.15 trillion ($ 1 trillion= $1000 billion), up by two-thirds from $686 billion last year. Altogether, Europe’s billionaires are $1 trillion richer than a year ago. 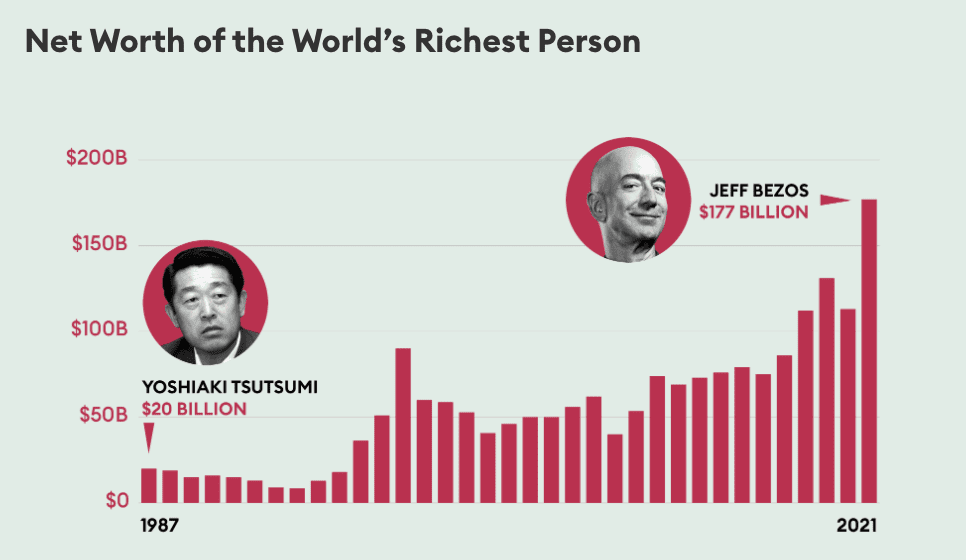 Four Individual Worth $100 Billion (Each)

This year there are four people worth $100 billion or more—up from just one (Bezos) on last year’s list. Besides Bezos, Musk, and Arnault, there’s Bill Gates, who ranks No. 4 at $124 billion, buoyed by the strength of shares he owns in Microsoft, Canadian National Railway, and tractor maker Deere & Company.

Rounding out the top five is Facebook founder Mark Zuckerberg, at $97 billion. He’s worth an eye-popping $42.3 billion more than a year ago; Facebook’s shares have risen 80% in the past year as people around the world used its social media platforms to stay in touch. The richest woman this year is cosmetics heir Francoise Bettencourt Meyers of France; see here for the richest women.

Warren Buffett is the world’s sixth-richest person, worth $96 billion. It’s the first year since 1993 that the revered investor running Berkshire Hathaway has not appeared in the top five. Not that the 90-year-old Oracle of Omaha had a bad year—he’s still worth $28.5 billion more than he was on the 2020 list. 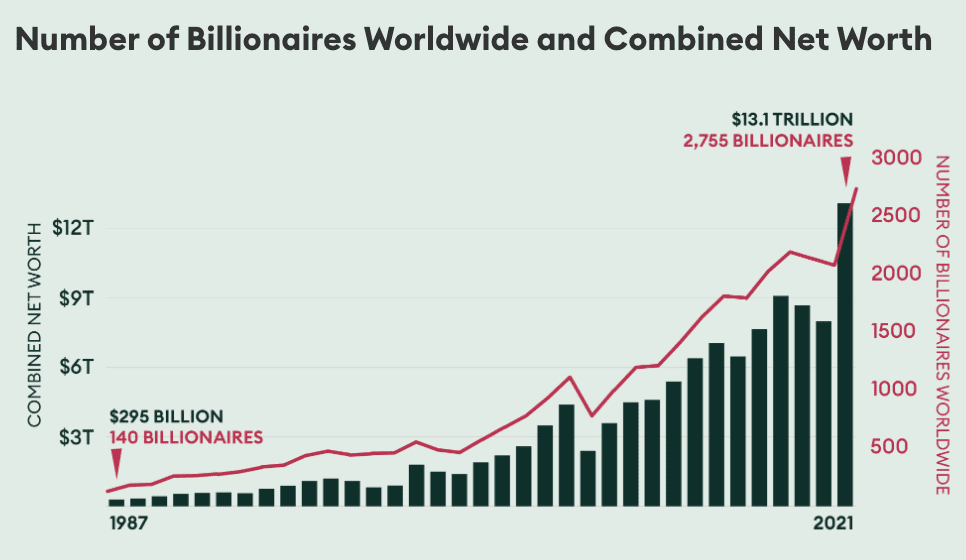 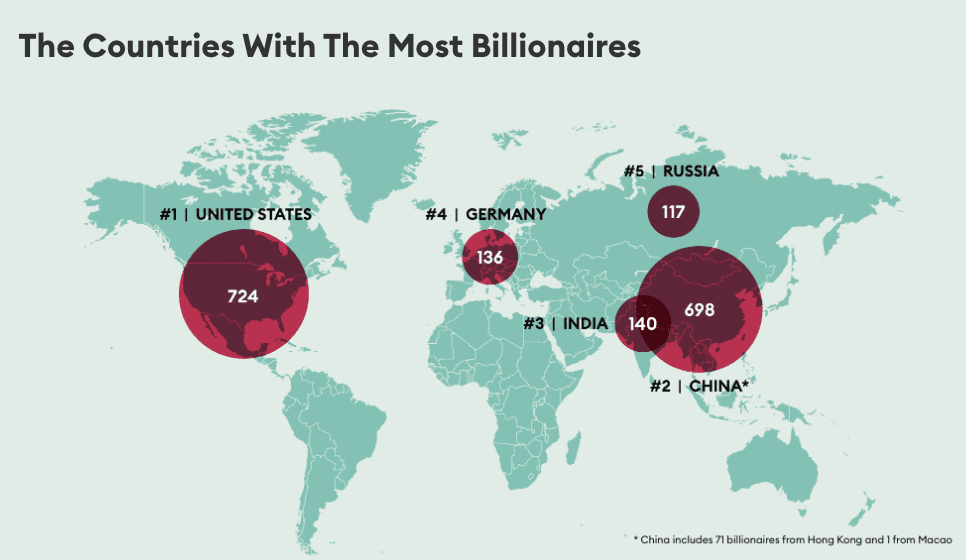 A record 1,975 billionaires are self-made, up from 1,457 last year. That equates to 72% of the list (vs. about 70% in 2020). It’s a marked change from the 2001 list of billionaires when 49% of the total 565 billionaires were self-made. Forbes uses the term “self-made” as a contrast to “inherited” and “inherited & growing;” it’s not meant to indicate that someone created a billion-dollar fortune all on their own. To achieve such a feat takes teamwork. 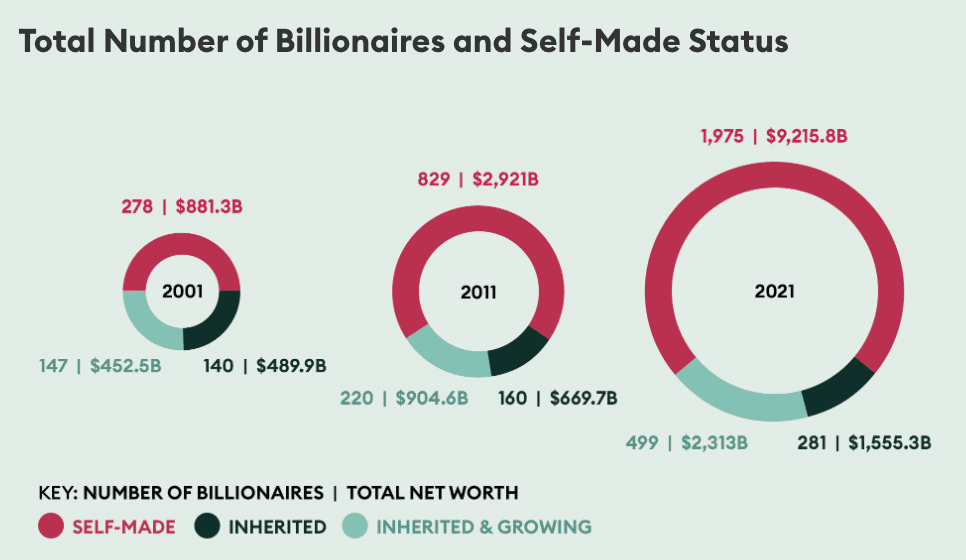 One hundred and six of the list members are under 40, two-thirds of whom are self-made. The new youngest self-made billionaire is 26-year-old American Austin Russell, who dropped out of Stanford to found automotive sensor firm Luminar Technologies; he is worth $2.4 billion and ranked No. 1299. There’s a new youngest billionaire as well: 18-year-old Kevin David Lehmann of Germany, whose father Guenther Lehmann transferred his stake in drugstore chain dm-drogerie mkt to him; he’s worth $3.3 billion and ranks No. 925. (Read more about the youngest billionaires here.). At the other end of the spectrum, the oldest billionaire, at age 99, is U.S. insurance tycoon George Joseph.

Richest in Asia from India

Mukesh Ambani of India has become the richest person in Asia, ranked No. 10 and worth an estimated $84.5 billion. He nudges out Jack Ma of China, Asia’s richest person a year ago, whose rank dropped to No. 26 (from No. 17 last year) despite a nearly $10 billion jump in his fortune to $48.4 billion. The biggest gainer in percentage terms this year is from China: Zhong Shanshan took his bottled water company Nongfu Spring public last fall on the Hong Kong Stock Exchange and shares soared, lifting his net worth to $68.9 billion, up 3,345% from $2 billion a year ago. 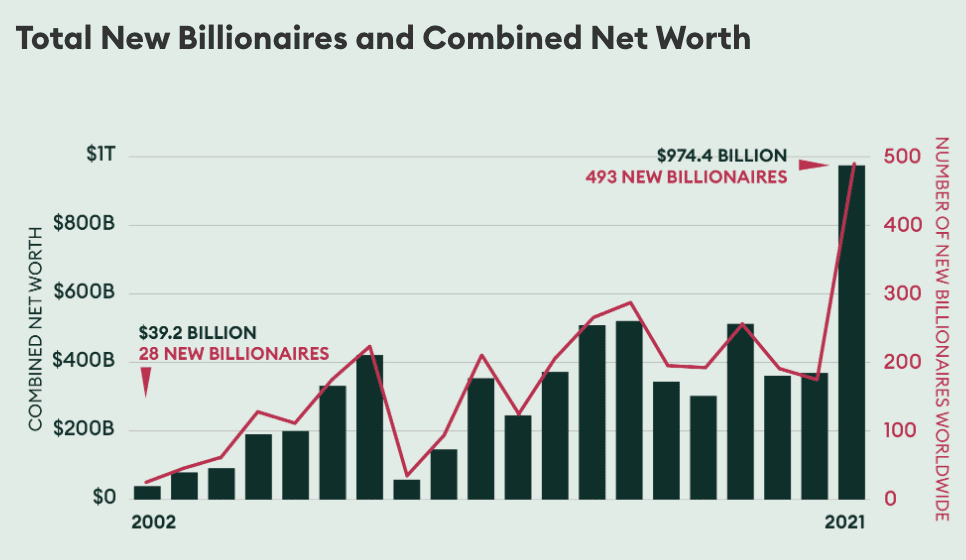 “We expect all our businesses to have a positive impact on our top and bottom lines. Profitability is very important to us or we wouldn’t be in this business”— Jeff Bezos