by Fastlane Freedom
in business
Reading Time:4min read
A A 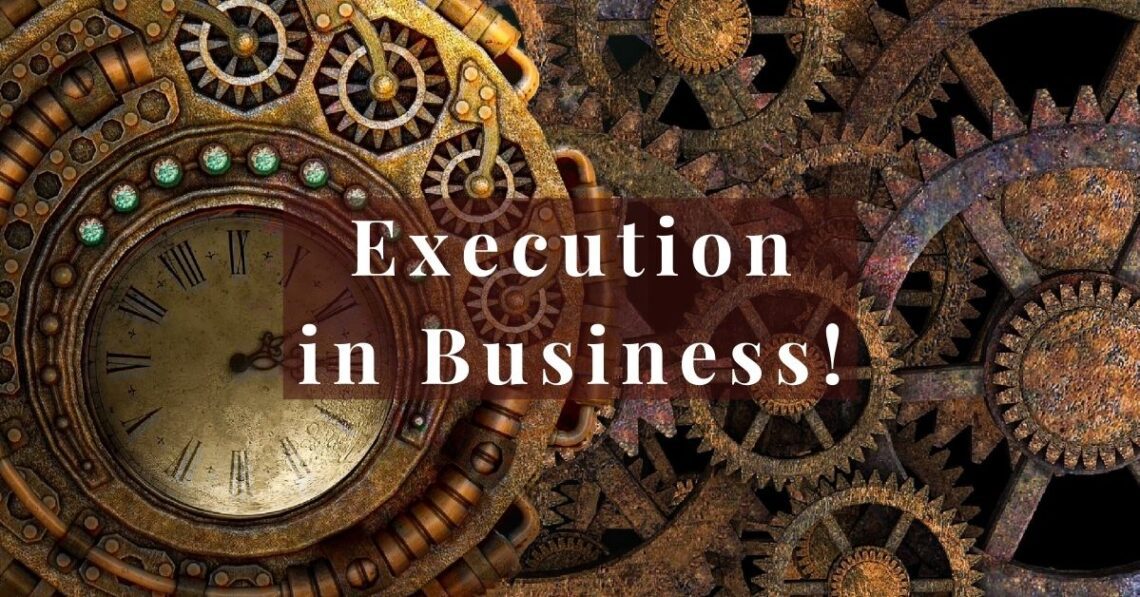 Execution in business! People think of execution as the tactical side of the business. That’s the big mistake. Tactics are central to execution, but the execution is not tactics. Execution is fundamental to strategy and has to shape it. No worthwhile strategy can be planned without taking into account the organization’s ability to execute it. If you’re talking about the smaller specifics of getting things done, call the process implementation, or sweating the details, or whatever you want to. But don’t confuse execution with tactics.

Execution is a systematic process of rigorously discussing hows and whats, questioning, tenaciously following through, and ensuring accountability. It includes making assumptions about the business environment, assessing the organization’s capabilities, linking strategy to operations and the people who are going to implement the strategy, synchronizing those people and their various disciplines, and linking rewards to outcomes. It also includes mechanisms for changing assumptions as the environment changes and upgrading the company’s capabilities to meet the challenges of an ambitious strategy.

In its most fundamental sense, execution is a systematic way of exposing reality and acting on it. Most companies don’t face reality very well. As we shall see, that’s the basic reason they can’t execute. Much has been written about Jack Welch’s style of management—especially his toughness and bluntness, which some people call ruthlessness. We would argue that the core of his management legacy is that he forced realism into all of GE’s management processes, making it a model of an execution culture.

The heart of execution lies in the three core processes: the people process, the strategy process, and the operations process. Every business and company use these processes in one form or the other. But more often than not they stand apart from one another like silos.

Typically the CEO and his senior leadership team allot less than half a day each year to review the plans—people, strategy, and operations. Typically too the reviews are not particularly interactive. People sit passively watching PowerPoint presentations. They don’t ask questions. They don’t debate, and as a result, they don’t get many useful outcomes. People leave with no commitments to the action plans they’ve helped create. This is a formula for failure. You need robust dialogue to surface the realities of the business. You need accountability for results—discussed openly and agreed to by those responsible—to get things done and reward the best performers. Also, you need follow-through to ensure the plans are on track.

These processes are where the things that matter about execution need to be decided. Which people will do the job, and how will they be judged and held accountable? What human, technical, production, and financial resources are needed to execute the strategy? Does the strategy deliver the earnings required for success? Can it be broken down into doable initiatives? People engaged in the processes argue these questions, search out reality, and reach specific and practical conclusions. Everybody agrees about their responsibilities for getting things done, and everybody commits to those responsibilities.

Most importantly, the leader of the business and his or her leadership team are deeply engaged. They are the owners of the processes—not the strategic planners or the human resources or finance staffs.

Lots of business leaders like to think that the top dog is exempt from the details of actually running things. It’s a pleasant way to view leadership: you stand on the mountaintop, thinking strategically and attempting to inspire your people with visions, while managers do the grunt work. This idea creates a lot of aspirations for leadership, naturally. Who wouldn’t want to have all the fun and glory while keeping their hands clean? Conversely, who wants to tell people at a cocktail party, “My goal is to be a manager,” in an era when the term has become almost pejorative?

This way of thinking is a fallacy, one that creates immense damage.

An organization can execute only if the leader’s heart and soul are immersed in the company. Leading is more than thinking big, or chit chat with investors and lawmakers, although those are part of the job. The leader has to be engaged personally and deeply in the business. Execution requires a comprehensive understanding of a business, its people, and its environment. The leader is the only person in a position to achieve that understanding. And only the leader can make execution happen, through his or her deep personal involvement in the substance and even the details of execution.

The leader must be in charge of getting things done by running the three core processes—picking other leaders, setting the strategic direction, and conducting operations. These actions are the substance of execution, and leaders cannot delegate them regardless of the size of the organization.

Act as a Coach

How good would a sports team be if the coach spent all his time in his office making deals for new players while delegating actual coaching to an assistant? A coach is effective because he’s constantly observing players individually and collectively on the field and in the locker room. That’s how he gets to know his players and their capabilities, and how they get first-hand the benefit of his experience, wisdom, and expert feedback.

It’s no different for a business leader. Only a leader can ask the tough questions that everyone needs to answer, then manage the process of debating the information and making the right trade-offs. And only the leader who’s intimately engaged in the business can know enough to have a comprehensive view and ask the tough incisive questions.

Only the leader can set the tone of the dialogue in the organization. Dialogue is the core of culture and the basic unit of work. How people talk to each other absolutely determines how well the organization will function. Is the dialogue stilted, politicized, fragmented, and butt-covering? Or is it candid and reality-based, raising the right questions, debating them, and finding realistic solutions? If it’s the former—as it is in all too many companies—reality will never come to the surface. If it is to be the latter, the leader has to be on the playing field with his management team, practicing it consistently and forcefully. (Excerpt from book ‘Execution’ by Larry Bossidy & Ram Charan).

Leaders have three fundamental responsibilities: They craft a vision, they build alignment, and they champion execution.” – Anonymous

Beliefs: A Key to Happiness or Misery

Persistence is the Key to Success – Nothing in this world can replace it!

Persistence is the Key to Success - Nothing in this world can replace it!

Power of Together: Conscious & Subconscious Mind