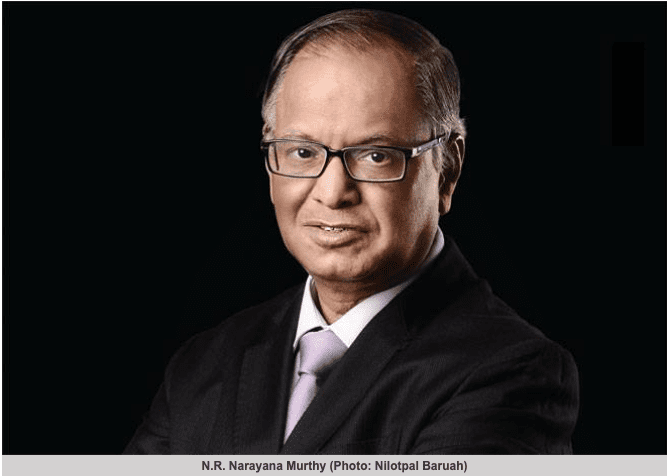 Nagavara Ramarao Narayana Murthy is the co-founder of Infosys. He has been described as the “father of the Indian IT sector” by Time magazine for his contribution to outsourcing in India. Murthy has been honored with the Padma Vibhushan and Padma Shri awards.

Before starting Infosys, Murthy worked at the Indian Institute of Management Ahmedabad as the chief systems programmer, and Patni Computer Systems in Pune (Maharashtra). He started Infosys in 1981.

Most of us know EVENTS of Murthy’s life, but only a few are aware of the PROCESS he has gone through this outstanding journey. A toiling effort is required in any successful process. I got a beautiful insight about this process from the book ‘The Billion Dollar Secret’ by Rafael Badziag. The outcome of this process was amazing, a billionaire emerged in India, in a developing country. A myth was busted that self-made billionaires can only emerge in rich, developed countries.

Content credit to Rafael Badziag for his outstanding work to study the life of 20 nos. self-made BILLIONAIRE across the world.

Early Life of a Billionaire!

If you think it is necessary for a person to be born in a rich, developed country in order to become a billionaire, you are mistaken. The story of Narayana Murthy provides a good example. N. R. Narayana Murthy was born in 1946 in India. Narayana’s family didn’t have furniture; everybody sat and slept on the floor. His father advised him to choose his hobbies carefully and select ones that wouldn’t drain his meager budget. Reading, listening to music, and talking to friends became his hobbies of choice. He couldn’t afford to buy a newspaper, so he would go to the public library and read a copy there.

In the early 1980s, India not only was one of the poorest countries in the world. It was also one of the countries most hostile to free enterprise. India had a socialist government that had developed an array of restrictions and ridiculous regulations that made it almost impossible to conduct business. This led to extreme corruption; government officials had the power to decide which enterprises would succeed and which ones would fail. As a result, India’s economy was strangled.

In 1981, when Narayana Murthy, together with several partners, founded the software company Infosys, the problems they encountered seemed insurmountable. The country’s frequent power shortages were one of the lesser obstacles they eventually would face.

Consider this: Do you think it is possible to run a software company without a computer? Well, Infosys didn’t have one. Why? Because a license was needed from the government in order to import a computer to India.

Narayana Murthy told me he had to endure three years and 50 visits to Delhi to obtain that license. The time frame barely hints at what was involved in this endeavor. Infosys was located in Bangalore, and Delhi was some 1,500 miles away. Narayana couldn’t afford to fly, so he needed to travel by train two days each way. As mentioned, the bureaucracy required 50 visits to Delhi; if you do the math, that is the equivalent of 200 days in total travel time in a three-year period!

Now, you are probably asking yourself: During the three years they didn’t have a computer, how was it possible for them to run a software company? How did they program?

The team found a customer in America who was amenable to allowing them to program on his computer. Six of the cofounders traveled to the United States to work on this, while Narayana remained in India in order to clear up the formalities and obtain approval to import their own computers.

Communication was yet another problem. Narayana informed me that it took the average Indian company five to seven years to get a phone line. Aside from the technological backwardness, the reason for the long wait was that retired government officials were prioritized to get phone lines.

The obvious question here: How did he communicate with his co-founders and customers in the United States without a telephone (and in the days before email)?

Narayana made regular visits to the post office, where he used a public phone box to call them.

I asked Narayana what happened if they needed to contact him. He smiled at me and replied, “Well, they couldn’t, they just couldn’t.”

After a year of struggling, they finally had a phone line installed. But having a phone line didn’t necessarily mean they could also get connections—especially with the United States. Most of the time there was no signal on the line; when there was a signal, it was usually busy.

As previously mentioned, it took three years for them to obtain a license to import the computer. After the computer was imported and installed, the six co-founders returned to India to work on it. But that still wasn’t the end of the bureaucratic obstacles they had to overcome. They now had to figure out how to get the code they produced to the customer in the United States.

This occurred pre-internet, so it wasn’t as if they could simply email the code to the customer. The only way to do it back then was to save the program on magnetic tape and send it via the traditional mail service. On the other side, the customer loaded it from the magnetic tape to his computer. Unfortunately, this solution didn’t work between India and the United States.

Why not? Because any package being shipped from India to the United States needed to go through Indian customs. It took customs officials about two weeks to perform the customs procedure. This meant that it took three weeks for the code to be shipped from Infosys in India to the customer in the States. With every change Infosys made to the program, they needed to wait another three weeks before they could receive any feedback from their client. The consequence was that project durations extended to what seemed like an eternity. This process was unacceptable and akin to entrepreneurial hara-kiri. They needed to shorten the shipment time considerably to speed up their production cycles.

How did they solve this?

The team came up with the idea of printing out the code on paper and faxing it to the United States where, on the other side, another Infosys employee typed it manually from the fax into the customer’s computer. Of course, this required additional manual work and wasn’t error-free. But it dramatically increased the speed of their software shipments.

Today, Infosys is considered one of the wealthiest and most developed companies in India, offering the best working conditions available for their employees.

It is therefore a myth that only people born in rich, developed countries can become billionaires. In fact, not only has Narayana himself become a billionaire, but he also made six of his co-founders into billionaires and at least 4,000 of his employees into millionaires.

What most people fail to realize is that wealth in developing countries grows much faster than in industrialized countries. In 2016, the number of billionaires in Asia surpassed the total in all of North America.

“Our assets walk out of the door each evening. We have to make sure that they come back the next morning.” – N. R. Narayana Murthy

Student Life (Self-Limiting Beliefs)! – How to overcome them?

What is Your Mindset ? Why is it so important in your success?

Billionaires Who Born Poor! One of them is worth more than $ 80 billion...