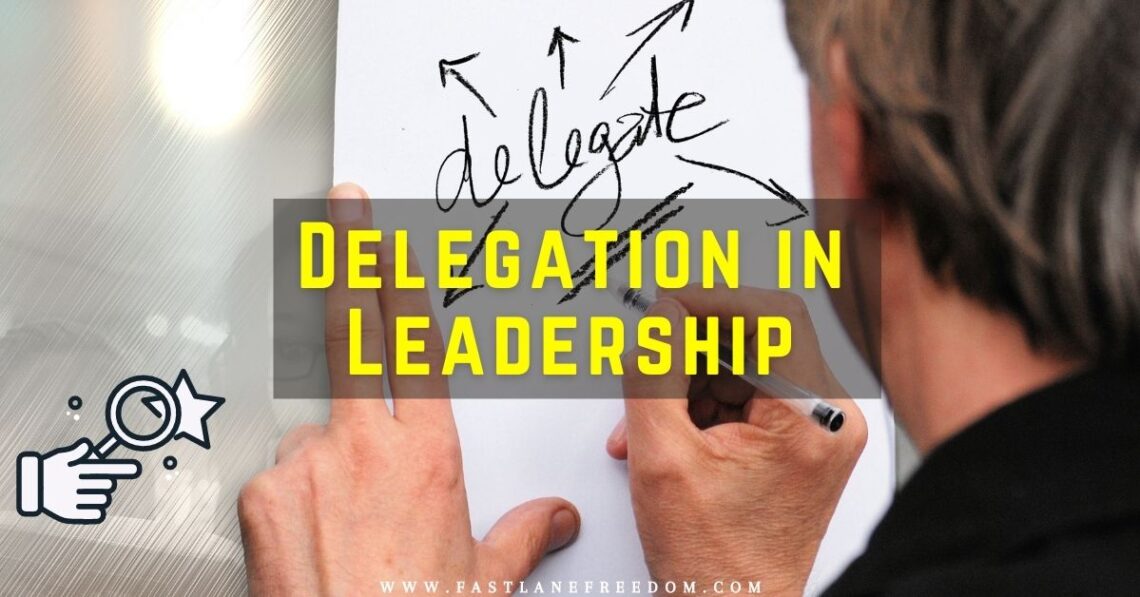 Delegation is one of the key skill of a leader. But only a few are able to do it effectively. Delegation for some leaders is a mean to empower their subordinates & for others it’s just getting some clerkly stuff done.

Many people refuse to delegate to other people because they feel it takes too much time and effort and they could do the job better themselves. But effectively delegating to others is perhaps the single most powerful high-leverage activity there is.

Transferring responsibility to other skilled and trained people enables you to give your energies to other high-leverage activities. Delegation means growth, both for individuals and for organizations. The late J. C. Penney was quoted as saying that the wisest decision he ever made was to “let go” after realizing that he couldn’t do it all by himself any longer. That decision, made long ago, enabled the development and growth of hundreds of stores and thousands of people.

The ability to delegate to others is the main difference between the roles of manager and independent producer. A producer does whatever is necessary to accomplish desired results, to get the golden eggs. An architect who draws up blueprints, or a secretary who types correspondence is a producer.

But when a person sets up and works with and through people and systems to produce golden eggs, that person becomes a manager in the interdependent sense. An architect who heads a team of other architects is a manager. A secretary who supervises other secretaries and office personnel is an office manager.

A producer can invest one hour of effort and produce one unit of results, assuming no loss of efficiency.

A manager, on the other hand, can invest one hour of effort and produce ten or fifty or a hundred units through effective delegation.

Management is essentially moving the fulcrum over, and the key to effective management is delegation.

There are basically two kinds of delegation: “gofer delegation” and “stewardship delegation.” Gofer delegation means “Go for this, go for that, do this, do that, and tell me when it’s done.” Most people who are producers have a gofer delegation paradigm. Remember the machete wielders in the jungle? They are the producers. They roll up their sleeves and get the job done. If they are given a position of supervision or management, they still think like producers. They don’t know how to set up a full delegation so that another person is committed to achieve results. Because they are focused on methods, they become responsible for the results.

When people get promoted from producer to manager role, many of them still keep on doing producer work. In spite of having good team with them, they avoid delegation.

There’s a much better way, a more effective way to delegate to other people. And it’s based on a paradigm of appreciation of the self-awareness, the imagination, the conscience, and the free will of other people.

Stewardship delegation is focused on results instead of methods. It gives people a choice of method and makes them responsible for results.

It takes more time in the beginning, but it’s time well invested. You can move the fulcrum over, you can increase your leverage, through stewardship delegation.

Create a clear, mutual understanding of what needs to be accomplished, focusing on what, not how; results, not methods. Spend time. Be patient. Visualize the desired result. Have the person see it, describe it, make out a quality statement of what the results will look like, and by when they will be accomplished.

Identify the parameters within which the individual should operate. These should be as few as possible to avoid methods delegation but should include any difficult restrictions. You wouldn’t want a person to think he had considerable freedom as long as he accomplished the objectives, only to violate some long-standing traditional practice or value. That kills initiative and sends people back to the gofer’s creed: “Just tell me what you want me to do, and I’ll do it.”

If you know the failure paths of the job, identify them. Be honest and open—tell a person where the quicksand is and where the wild animals are. You don’t want to have to reinvent the wheel every day. Let people learn from your mistakes or the mistakes of others. Point out the potential failure paths, what not to do, but don’t tell them what to do. Keep the responsibility for results with them—to do whatever is necessary within the guidelines.

Identify the human, financial, technical, or organizational resources the person can draw on to accomplish the desired results.

Set up the standards of performance that will be used in evaluating the results and the specific times when reporting and evaluation will take place.

Specify what will happen, both good and bad, as a result of the evaluation. This could include such things as financial rewards, psychic rewards, different job assignments, and natural consequences tied into the overall mission of an organization.

Trust is the highest form of human motivation. It brings out the very best in people. But it takes time and patience, and it doesn’t stop the necessity to train and develop people so that their competency can rise to the level of that trust.

If stewardship delegation is done correctly, both parties will benefit and ultimately much more work will get done in much less time. A family that is well organized, whose time has been spent effectively delegating on a one-on-one basis, can organize the work so that everyone can do everything in about an hour a day. But that takes the internal capacity to want to manage, not just to produce. The focus is on effectiveness, not efficiency.

Certainly you can pick up that room better than a child, but the key is that you want to empower the child to do it. It takes time. You have to get involved in the training and development. It takes time, but how valuable that time is downstream! It saves you so much in the long run.

Effective delegation is perhaps the best indicator of effective management simply because it is so basic to both personal and organizational growth.

“No person will make a great business who wants to do it all himself or get all the credit.”– Andrew Carnegie

Leadership Quotes To Inspire A Leader Within You!

Leadership Quotes To Inspire A Leader Within You!

Most Inspiring Joseph Murphy Quotes - Know the Power of Your Mind